The Zen of Groundhog Day 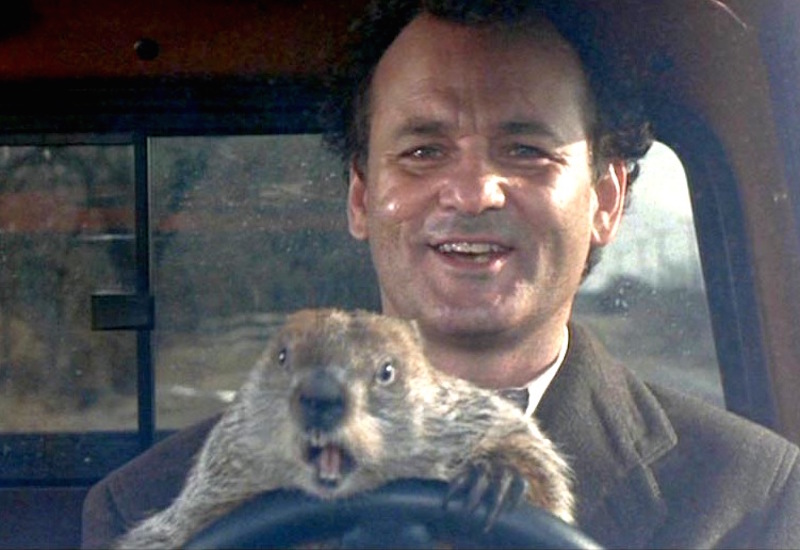 This past Friday was Groundhog Day and Punxsutawney Phil has given us his prediction – six more weeks of winter. Of course, that depends where in the country you live! That aside, it has become a tradition that many people look forward to and provides great conversation at the water cooler, with cashiers while getting groceries, and on Facebook.

Lou and I have an annual tradition of watching the movie Groundhog Day every February 2, without fail. I was pleased to hear the movie celebrated its 25th anniversary this year. If you’re unfamiliar with the premise of the story, Bill Murray plays a disgruntled Pittsburgh Pennsylvania weatherman who does not have a very good attitude about anything in life, He is forced to cover the annual Groundhog Day festivities in Punxsutawney Pa for the fourth year in a row and is disgusted by it. Due to circumstances that are unclear, and really not that important, he wakes up the next morning reliving February 2nd over and over again. This continues for days, weeks, months … In fact, I found a statistic from a website, Wolf Gnards, that stated he was trapped in Groundhog Day for eight years, eight months, and sixteen days.

During this ridiculously lengthy purgatory of sorts, he experiences every mental, emotional, and behavioral reaction to the circumstances one can imagine. He goes through the stages of grief: he is first in denial; he has a long period of anger in which he is horrible to everyone; he finds ways to bargain with his situation and manipulate the events of the day for his own selfish desires; he has a period of depression that becomes so bad he commits suicide, many times. Even suicide does not stop him from waking up the next day on February 2nd. Acceptance stage arrives when he decides to make the best of it and be helpful and nice to everyone he can. The cycle breaks and he is freed.

This movie has several layers. The superficial top layer is perfectly wonderful. It’s a funny movie! Bill Murray is a great comedian and the cast and characters are very entertaining. His aversion to life, ever-present cynicism, and frequent sarcasm resonates with all of us at those moments in our own lives that we struggle with and occasionally drop into a negative attitude. One of my favorite scenes is when he is in the diner smoking cigarettes, eating an entire table full of cakes, sweets, and indulgent foods since he knows it doesn’t matter. His love interest Rita asks him “Don’t you worry about cholesterol, lung cancer, love handles?” He replies “I don’t worry about anything … anymore.” Who doesn’t wish they could be him at that moment? 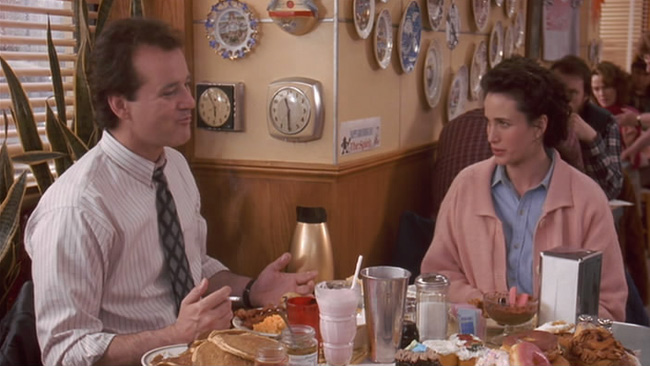 If you look at this movie deeper though, you can experience it as a great example of the importance of having a positive attitude and the ability to see the “glass half full, not half empty” as the bowling alley scene demonstrates. Seeing outside yourself, doing helpful deeds for others and spending each day making the community you are part of better, results in your own life improving. This positive attitude message is the foundation of many self-improvement programs, the bread and butter of life coaches and a basic message of most religions.

Another interpretation is the “love conquers all” idea. Bill Murray’s character discovers he is in love with Rita, and lives with that longing day after day, trying to find any possible way to get her to love him within the constraints of 23 hours. He fails miserably, but he has the realization that love goes beyond desire. He accepts the fact he can’t make her love him but allows the feeling of love to stay in his heart. This is what transforms him. This is when he decides to change his attitude. The feeling of love itself, even when he could not get what he wanted, was enough to transform him.

I’d like to go even deeper and present a perspective on this movie based on eastern philosophy and the teachings of yoga and Buddhism. Groundhog Day as a holiday has a purpose. This purpose is to answer the question “how much longer do we have to put up with suffering?” Unless you operate a ski resort, winter for most people, is a difficult season to endure. People are sick of being cold, bundling up every time they leave the house, and driving on slippery roads. They want to know when it will end. This comes from a mind that is in the future, not the present. The future has many possibilities and cannot be predicted easily. We look to the future because the present is so uncomfortable, dissatisfying or unfulfilling. Bill Murray’s character in this movie has the same struggle with his experience of reliving the same day over and over – when will this end?

There is an antidote to the aversion towards present circumstances that is not based on folklore or wishful thinking. This antidote was demonstrated in the movie. Yes, the main character changes his fate by being nicer to people, but it’s more than that. He stopped focusing on tomorrow and just paid attention to today. All that mattered was how he would navigate his moment by moment experience as the day progressed. When he stopped struggling with it, he naturally was helpful and loving. It’s the struggle that causes all of us to have discontentment. If we embrace the present moment as it is, without deciding there’s something wrong with it, we can work with it in a balanced way. This practice is more effective than just positive thinking. If you allow the situation you are in to be as it is, without judgment or comparing, you will spontaneously flow with it without needing to force positivity. This is true spirituality and it’s the antidote to suffering.

The other aspect of acceptance, allowing, and going with the flow, is that you live from your actual experience of life, not your ideas about life. There is so much to notice, pay attention to, embrace in each moment if the attention is opened up to more than just our thoughts about it. Even the hardships of winter have fascinating qualities and opportunities to find comfort. This is mindful living, being fully present and awake to the bigger picture of existence. 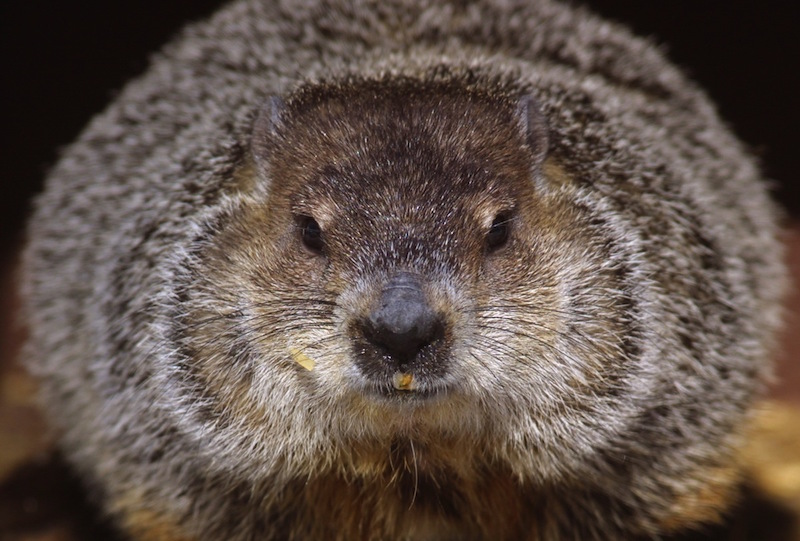 385117 04: Cloudy, one of the groundhogs at Brookfield Zoo in Brookfield, IL., contemplates an exit from her wooden home on Groundhog Day, February 2, 2001. The weather-prognosticating groundhog did indeed see her shadow, a sign that winter will last another six weeks in North America, according to the time-honored custom. (Photo by Tim Boyle/Newsmakers)

Groundhog Day is a metaphor for the challenge we all face – how to find perfection in an imperfect world? This is a spiritual quest that goes beyond religion. It is a question most people contemplate if they haven’t thrown in the towel and succumbed to living life as a begrudged pessimist. It’s an important question and one that can transform a stressed, painful existence to a fulfilling, inspiring experience. All the major world religions, from both western and eastern traditions, have a common thread of wisdom that answers this question. That is why spirituality is so important because it goes beyond the individualistic ideas and beliefs of particular religions and addresses the bigger picture that affects us all. Instead of copying the groundhog and running back into your underground tunnel, I’d like to suggest diving into spirituality for these six more weeks of winter, to turn this winter into a wonderful period of time in your life.

Living Stress Free® is presenting a workshop on February 17, 2018 “Finding Perfection in an Imperfect World: A Spiritual Workshop.” We will be exploring this question in depth, borrowing wisdom from many spiritual and religious paths, meditating and experiencing the flow that occurs when we drop the struggles of resistance and aversion. This four-hour workshop will provide a wonderful opportunity to saturate yourself in the pool of mindfulness and core awareness, to help transform your perspective on this challenging world we live in. “Finding Perfection in an Imperfect World” is being offered in Rochester, NY on Saturday, February 17th, 9:00 am – 1:00 pm. Registration is open. More Details Here